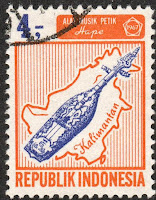 Borneo (Indonesian: Kalimantan) is the third largest island in the world and the largest in Asia. At the geographic center of maritime Southeast Asia, relative to the main Indonesian islands, it lies north of Java, west of Sulawesi, and east of Sumatra. The island is politically divided between three countries: Malaysia and Brunei in the north and Indonesia in the south.
The Indonesian portion occupies 73% of the island, it is officially called Kalimantan and is administratively divided into five provinces: Kalimantan Barat, Kalimantan Tengah, Kalimantan Selatan, Kalimantan Timur and Kalimantan Utara. Its population, in 2019, was 16,379,977 inhabitants. It has coasts on the Java and Celebes Seas and on the Macassar Strait, which separates Borneo from Sulawesi.

The sape (sapeh or hape) is a traditional lute of the communities who live on the banks of the rivers of East Kalimantan. Sapes are carved from a single bole of wood, and many modern instruments reaching over a metre in length. Initially the sape was a fairly limited instrument with two strings and only three frets. Its use was restricted to a form of ritualistic music to induce trance. Gradually the sape became a social instrument to accompany dances or as a form of entertainment. Today, three, four or five-string instruments are used, with a range of more than three octaves.