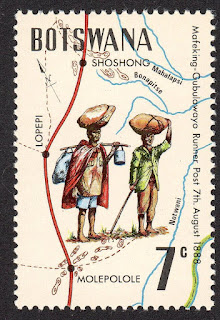 Mail Runners.
Map of a section of the Mafeking-Gubulawayo postal route, 1888.
Third stamp in a set of 4, issued on 21.08.1972.
Face value: 7 cents of Botswana pula.
Printing: Offset lithography.

The history of the postal services in Botswana starts with the first attempts at establishment of such a service being inaugurated by Sir Charles Grey, governor of the Cape, as far back as 1860. Around 1875 the London Missionary Society established its own runner service north of Bulawayo, through Tatitown and Shoshong, linking with another private runner service operated by the Shoshong missionaries and Chief Khama; this in turn ran south to Dinokana, where it linked up with the postal service of the the Republic of South Africa. By the mid-1880's the service was handling up to 8000 letters annually. After the protectorate had been declared, the first official service administered from Vryburg commenced in 1888, covering the area from Mafeking (via Kanye and Molepolele) to Bulawayo. A year later, with the establishment of a mule cart service, the runners were laid off. 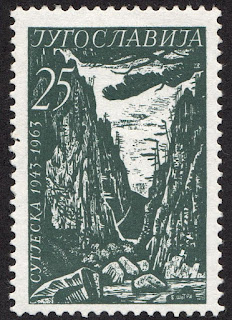 The Battle of Sutjeska (Bitka na Sutjesci) or "Operation Schwarz" was a joint attack by the Axis Powers that took place from May 15 to June 16, 1943, during the WWII, and aimed at destroying the main Yugoslav partisan force near the Sutjeska River in southeastern Bosnia and Herzegovina. Despite the heavy losses suffered, the Battle of Sutjeska has been considered by Yugoslav historiography as one of the greatest victories in its history. It was also the last major joint German-Italian operation against the partisans. 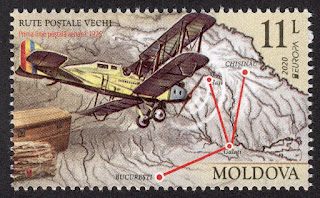 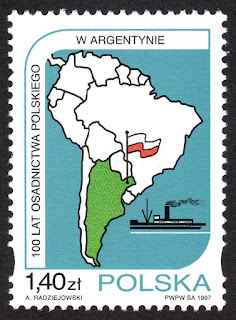 Polish immigration in Argentina began at the end of the 19th century. Poland was the fourth largest net contributor of European immigrants after Spain, Italy and Germany. The first known Polish immigrants were a group of 14 families (120 people) from Galicia, a territory of the Austro-Hungarian Empire divided today between Poland and Ukraine, who were heading to the United States and who, due to lack of documentation, had to choose between returning to their places of origin or undertake another destination: the Argentine consul in Trieste offered them lands to colonize in their country and they accepted. They arrived in La Plata in 1897. The governor of the National Territory of Misiones, Juan José Lanusse, accepted to welcome them. Today it is estimated that more than a million Argentines have Polish ancestry. 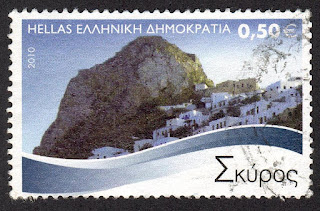 Skyros (Greek: Σκύρος), is southernmost island of the Sporades, an archipelago in the Aegean Sea. At 209 km2 (81 sq mi) it is the largest island of the Sporades, and has a population of about 3,000 (in 2011). It is part of the regional unit of Euboea. The north of the island is covered by a forest, while the south, dominated by the highest mountain, called Kochila (792 m, 2,598 ft), is bare and rocky. The island's capital is also called Skyros (or, locally, Chora). The main port, on the west coast, is Linaria. The island has a castle (the kastro) that dates from the Venetian occupation (13th to 15th centuries), a Byzantine monastery (the Monastery of Saint George), the grave of English poet Rupert Brooke in an olive grove by the road leading to Tris Boukes harbour. There are many beaches on the coast. 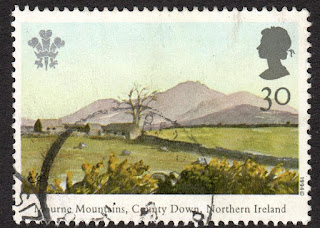 The Mourne Mountains (Irish: Beanna Boirche), also called the Mournes or Mountains of Mourne, are a granite mountain range in County Down in the south-east of Northern Ireland. They include the highest mountains in Northern Ireland, the highest of which is Slieve Donard (Irish: Sliabh Dónairt) at 850 m (2,790 ft). The Mournes are designated an Area of Outstanding Natural Beauty and it has been proposed to make the area Northern Ireland's first national park. 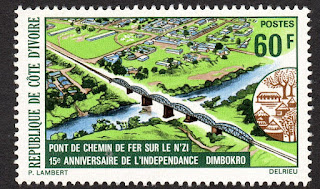 The Railroad Bridge on N'zi River (French: Pont de chemin de fer sur le N’zi or viaduc du N'zi) over the N'zi River is located in the city of Dimbokro, capital of the N'zi-Comoé region. It is 250 m (820 ft) long, was built by the Régie des chemins de fer Abidjan-Niger and was inaugurated on September 11, 1910. The railway line from Abidjan to Burkina Faso passes through it. On September 6, 2016, bridge collapsed partially. 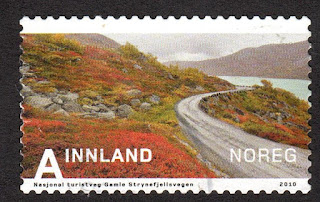 The Old Strynefjell Road (Norwegian: Nasjonal turistveg Gamle Stynefjellsvegen) runs from Grotli to Videsæter (south-western Norway), a total distance of 27 km (16.77 mi). In places this stretch is narrow with a number of bends and there are restrictions. Vehicles that are more than 8 m long and have an axle load of more than 8 tonnes will be banned from driving on it. The decision to build this road was made in 1881, and the work was completed in 1894. The road is closed during winter and opens in June. 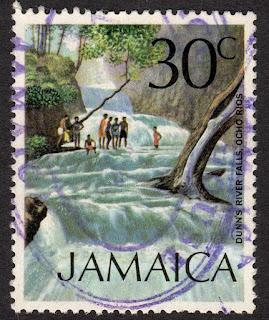 Dunn's River Falls (also known in Spanish as Las Chorreras) is a famous waterfall near Ocho Rios, Northern Jamaica. At about 55 m (180 ft) high and 180 m (600 ft) long, the waterfalls are terraced like giant natural stairs though some incorporate man-made improvements. Several small lagoons are interspersed among the vertical sections of the falls. They empty into the Caribbean Sea at the western end of a white-sand beach. The falls were the location where the Battle of Las Chorreras took place on October 30, 1657, when the British defeated a Spanish expeditionary force from Cuba. 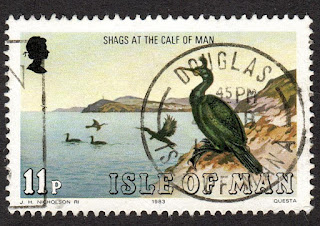 The Isle of Man (Manx: Ellan Vannin) is an island and self-governing British Crown Dependency in the Irish Sea between Great Britain and Northern Ireland. The head of state, the King or Queen of the United Kingdom, holds the title Lord of Mann and is represented by a Lieutenant Governor. The United Kingdom is responsible for the  military defense. The total area of the island is 572 km2 (221 sq mi), and its capital is Douglas.
Calf of Man (Manx: Yn Cholloo) is a 2.50-square-kilometer (618-acre) island, off the southwest coast of the Isle of Man, from which it is separated by a narrow stretch of water called the Calf Sound. Until 1939 the island was under private ownership by the Keig family, but was purchased by F. J. Dickens of Silverdale, Lancashire who then donated it to the National Trust to become a bird sanctuary.
The bird depicted on the stamp is an European Shag (Gulosus aristotelis).
en 11.10.21 No comments: 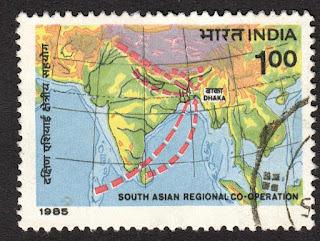 The South Asian Association for Regional Cooperation (SAARC) is the regional intergovernmental organization and geopolitical union of states in South Asia. Its member states are Afghanistan, Bangladesh, Bhutan, India, the Maldives, Nepal, Pakistan and Sri Lanka. The Association was founded in Dhaka, Bangladesh, on 8 December 1985 (as this stamp commemorates) by seven states (Afghanistan joined in 2005). Its secretariat is based in Kathmandu, Nepal. The organization promotes development of economic and regional integration. It launched the South Asian Free Trade Area in 2006. The SAARC maintains permanent diplomatic relations at the United Nations as an observer and has developed links with multilateral entities, including the European Union. 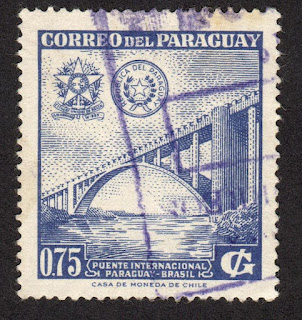 Known as the International Friendship Bridge (Spanish: Puente Internacional de la Amistad; Portuguese: Ponte Internacional da Amizade) it was built between 1959 and 1965 over the Paraná River, and connects the cities of Foz do Iguaçu (Brazil) and Ciudad del Este (Paraguay). It is 552.4 m (1,812 ft) long and 78 m (256 ft) high. It was officially inaugurated on March 27, 1965 by the presidents of Paraguay, Alfredo Stroessner, and of Brazil, Humberto de Alencar Castelo Branco. 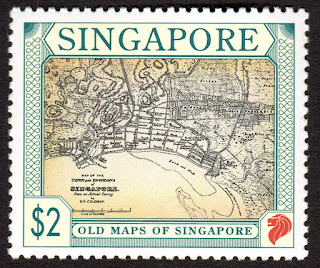 George Drumgoole Coleman (1795-1844), also known as George Drumgold Coleman, was an Irish civil architect who played an instrumental role in the design and construction of much of the civil infrastructure in early Singapore, after it was founded by Sir Stamford Raffles in 1819. Came to Singapore in June 1822 and was responsible, as advisor to Raffles, of the planning of the center of the town, created roads, and constructed many fine buildings. In 1829 worked as a Topographical Surveyor and surveyed in minute detail the islands that would form the new city's harbor. 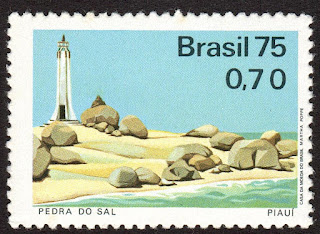 Pedra do Sal is a beach located on Ilha Grande de Santa Isabel, a river island in the Delta of the Parnaíba River, in the state of Piauí. Stones abound on the beach. There is also a lighthouse inaugurated on March 4, 1873: it is a 12.5 m (41 ft) metal octagonal tower. 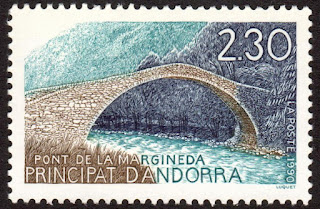 The Margineda bridge (Catalan: Pont de la Margineda) is located in Santa Coloma, Andorra la Vella Parish. It is a heritage property registered in the Cultural Heritage of Andorra. It was built in the 14-15th century. The bridge spans a Gran Valira River. The archstones are pumice, to keep the structure light. The walls are made of granite. 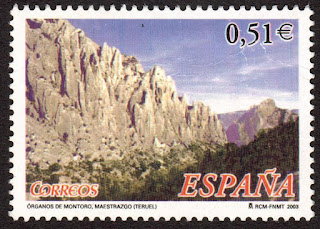 The Órganos de Montoro is a natural set comprising a large number of stunning limestone needles over two hundred feet high, found in the Maestrazgo / Maestrat mountain region in rhe province of Teruel (Aragon). Named after the resemblance to the pipes of a church organs. Its surface is 187.60 ha. The altitude ranges between 800 m (2,625 ft) above sea level in the Guadalope River and 1,183 m (3,881 ft) in the Peña de los Órganos. 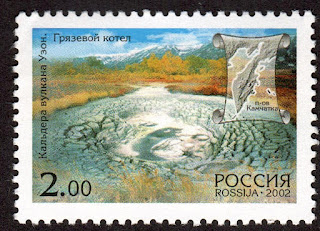 Uzon (Russian: Узон) is a destroyed extinct volcano, which had an altitude of around 3,000 m (1,865 ft), located on the territory of the Kronotsky Nature Reserve, east of the Kamchatka Peninsula. This is a unique area of manifestation of modern volcanism, the formation of minerals and ores, the place where the youngest oil on the planet emerges. The caldera of the Uzon volcano, formed about 40,000 years ago as a result of violent eruptions, is one of the largest in Kamchatka: it is a great depression up to 12 km (7.46 miles) in diameter in a latitudinal direction and up to 9 km (5.6 miles) heading south. It is occupied by Lake Dalny In 1854, the Estonian-German geologist Karl von Ditmar discovered mineral springs there. 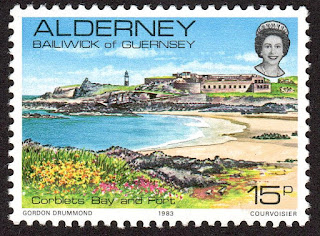 Corblets Bay is located on the northernmost of the island, near the city of Saint Anne, and has a very popular beach. On its eastern side, at an altitude of 16 m (52.5 ft), is Fort Corblets (visible on the stamp), a now-ruined Victorian defensive construction built in the 1850s. 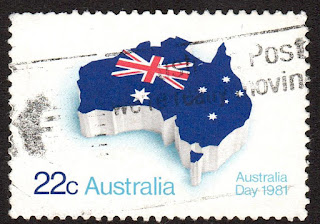 Australia Day is the official national day of Australia. Observed annually on 26 January, it marks the 1788 landing of the First Fleet at Sydney Cove and raising of the Union Flag by Arthur Phillip following days of exploration of Port Jackson in New South Wales. 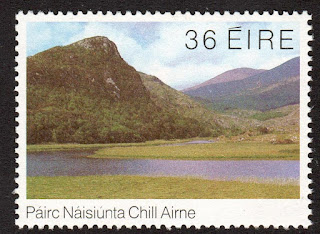 Killarney National Park (Irish: Páirc Náisiúnta Chill Airne), near the town of Killarney (Cill Airne), County Kerry, was the first national park in Ireland, created in 1932; its area is 102.89 km2 (39.73 sq mi). It is one of the few places in Ireland that has been continuously covered by forest since the end of the most recent ice age, about 10,000 years ago. Eagles Nest (Irish: Nead an Iolair) is a 334 m (1,096 ft) high mountain located between Muckross Lake and Killarney's Upper Lake. The park was designated a Biosphere Reserve by UNESCO in 1981 and is part of a Special Area of Conservation.