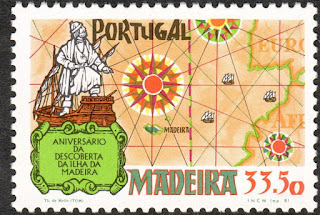 The Autonomous Region of Madeira (in Portuguese: Região Autónoma da Madeira) is an Atlantic archipelago belonging to Portugal, constituted as an outermost region of the European Union. It consists of two inhabited islands, Madeira and Porto Santo, the Desertas Islands (Ilhas Desertas) and the Savage Islands (Ilhas Selvagens). Its total area is 828 km² (320 sq mi) and its highest summit is Pico Roivo, 1,861 m (6,106 ft) above sea level. Although the islands were already known before the Portuguese occupation, Porto Santo was rediscovered in 1418 by João Gonçalves Zarco and Tristão Vaz Teixeira, who arrived on the island of Madeira, accompanied by Bartolomeu Perestrello, in 1419. The Portuguese colonization began around 1425 at the initiative of John I of Portugal or Henry the Navigator. The region achieved its autonomy on April 30, 1976.