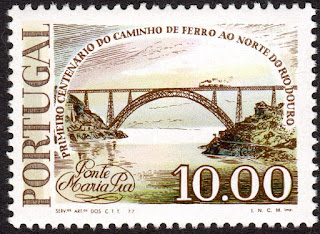 In December 1844, the Companhia das Obras Públicas de Portugal was founded, whose objective was to promote the construction of the railway. On October 28, 1856, the section between Lisbon and Carregado, on the East Line, now called the North Line, was opened to the public, and thus the infrastructure was inaugurated. The Maria Pia Bridge (Portuguese: Ponte de D. Maria Pia) over the Douro River, between Porto and Vila Nova de Gaia, was inaugurated on November 4, 1877 by King Luís I and Queen Maria Pia of Savoy, enabling the railway connection between the north and south of the country. It was designed by Théophile Seyrig, an associate of Gustave Eiffel, and remained in use until 1991, when it was replaced by the São João Bridge. Its length is 363 m (1,158 ft). It is a wrought iron double hinged crescent arch construction.