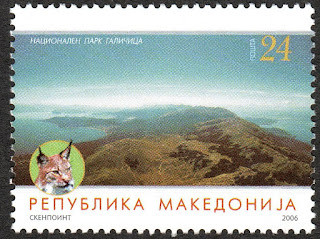 Galičica National Park (Macedonian: Национален парк Галичица) is located in the extreme southwest of North Macedonia, along the border with Albania, between the lakes Ohrid and Prespa, and comprises a large part of the mountain range of Galičica (Macedonian: Галичица; Albanian: Mali i Thatë), whose highest summit is Mount Magaro (Магаро), 2,254 m (7,396 ft). The park, which was established in 1958 and has an area of 243.2 km2 (93.90 sq mi), is characterized by its great floristic richness, with several endemic species, and its fauna, which includes animals such as the lynx (represented on the stamp), the brown bear and the wolf. It is divided into three sectors: a protected and restricted area, a tourist-recreational area and a reproduction and recovery area.